Back from camping. It's been SO long since I've camped, and it was so beautiful and fantastic to watch the kids play and get dirty and have such a fabulous time. I want to live in a yurt.
Posted by Good Enough Woman at 10:15 AM 5 comments:

I have been entering grades, which is a stressful process. All of those people on the cusp. Why are there so many people on the cusp? Clearly, I need to give more Ds throughout the semester to avoid this cusp problem. Do other people have this cusp problem? Do other people assign too many 70s and 71s on papers because they shy away from assigning big fat Ds and flag-waving Fs? Do other people feel terrible assigning Ds and Fs? I have no problem being very stingy with the As, but I am too generous with the Bs and Cs, methinks. I need to work on my bell curve.

And I am much less grumpy now. I started thinking I might be low on iron, so I went and got a burger yesterday. And fries. And a coke. Something did the trick.
Posted by Good Enough Woman at 3:33 PM 3 comments:

I am very grumpy today. I can't remember the last time I felt this down and grumpy. Perhaps it was grading online research papers and discovering that so many of them were so bad. Perhaps it was talking to my department chair about a plagiarism case. Perhaps its feeling as if I've been grading and grading and still I don't have any of my courses finished (because the online class is so labor-intensive to finish).

Whatever. I am irritable and trying to shake it.

I think things will get better after I submit grades for the online class and for the other comp class. Then, it's just some literature finals and things should go more quickly.

Perhaps this port and chocolate will help.

Or, perhaps, watching this episode of Independent Lens about the Holocaust will put things into perspective. It profiles a guy who says, "I had a very unique Holocaust experience. I was in the camp with my wife and my girlfriend. It was very difficult." It's a love story.
Posted by Good Enough Woman at 10:11 PM 3 comments:

So, the kids had questions about what kind of holiday yesterday was. They seemed a bit confused that people were throwing around the word "holiday" without also throwing around candy and/or presents.

I didn't want to be too graphic or talk about death and war, especially to the almost-four-year-old, so I said, "Memorial Day is when we remember soldiers who protected our country."

And the almost-four-year-old promptly said, "And they died in the wars?"

My State is Broke

And I don't mean broken, I mean broke. But I guess it's broken, too. I mean, why do we have all of these referendums (referenda?)?

Three days ago, we had a voting day. May 19. Several referenda (I'm going with that one) were on the ballot, include one for our budget. What is up with that? Can you imagine if the national budget had to be approved by the public? I know it has some special tax implications and all that, but still. How many people do you think went out and informed themselves of the issue? How many people actually went to vote on May 19? And now the budget is voted down.

I mean really, people. What's the point of a democratic republic--in which we elect representatives to make informed decisions on an issue--if you're just going to kick it back to the voters to decide the fate of the state? I know I'm starting to sound like Matthew Arnold here, but I mean, really. We have elected leaders for a reason. Let them make some freakin' decisions.

Perhaps this sounds kind of crazy, but I'm a little worried about what is going to happen to us out here in Cali. I think we might be on the verge of some kind of disaster.

Time to start looking for a cheap plot of land in Alabama.

I used to sheepishly refer to American Idol as my "guilty pleasure." But now I am officially renouncing the "guilty" part of that modifier. If it's good enough for KISS, Queen, Black-Eyed Peas, and Santana (just to name a few), then it's good enough for Good Enough Woman to watch proudly and with great pleasure.

I would like to say that no one should feel guilty about any of their entertainment pleasure, but I once saw Rock of Love at a vacation rental, and how can anyone watch that and not feel guilty about something?
Posted by Good Enough Woman at 10:36 PM 6 comments:

So I'm up late grading papers with the TV on in the background, which is probably not a good idea because I got totally caught up in watching Wallander on Masterpiece Mystery on PBS. Have you seen it?

So, anyway, now I'll be up even later.

And then, I flipped to the last few minutes of an SNL special that focused on film shorts. There were "Deep Thoughts" from Jack Handey, which I have always though to be hilarious. And then the program ended with a short called " Homeward Bound" from the first SNL episode ever (I think). It featured a song by Paul Simon along with images of people at airports greeting their deplaning loved ones. Reminded me of Ani DiFranco's song "The Arrivals Gate," and really reminded me of when we used to be able to do that--go all the way to the gate to say "goodbye" or "hello" to our traveling loved ones. Shoot, I remember when you could actually get on the plane with someone to say "goodbye." I remember my dad doing that at the end of a summer visit.

A lot of the time, I hate that I live so far from an airport hub and that I have to take puddle-jumpers all the time. On the flip side, when I come home from a trip, my kids and husband are right there when I walk through the door. No deplaning by myself, walking alone to baggage claim. It's straight in the door and straight to the hugging and kissing.
Posted by Good Enough Woman at 11:07 PM 6 comments:

The Giving of the Lizard

The Giving of the Lizard, as Ink dubbed it, went well. When the boy arrived home, the lizard was in a cage in his room. But, amazingly, the boy didn't go in his room. During present-opening time, he received various lizard-related caretaking things, but I think he still thought he would not get a lizard for a few weeks. After he opened his presents, we said, "Okay, buddy, you have one more thing. Go look in your room."

He was thrilled. He thinks she's beautiful. He named her Tiki. But he stills calls her a "him." It is sort of difficult to call a bearded dragon a "her."
However, despite his lizard love, he is, I think, having some angst about the whole thing. The angst seems to stem from the fact that, because his hands are little, the lizard feels a bit unstable in his hands and gets a little flighty and freaked out. Also, the caretaking is not too complicated, but there is enough going on that the boy needs a bit of help. I think he's struggling with the fact that he needs help. He wants to be the one who knows exactly what to do. He wants the lizard to feel most comfortable with him. Since these things aren't happening, he sometimes shuts down a bit, in relationship to the lizard, and goes outside to look for tiny bugs that he can manage completely on his own.
But we're trying not to quiz him too much about what's bothering him and why he doesn't want to hold the lizard more. Because he's also the type of kid who wants to please people, so he wouldn't want anyone to think he doesn't love the lizard because he would be worried that we'd feel bad since we wanted him to love it.
Ah, the joys of having a smart, perfectionistic, sensitive kid. Or perhaps I'm just projecting?
Luckily, we all like the lizard, so we're just rolling with it, hoping that as he gets more familiar and confident with the lizard routine, he'll feel better.
Interesting details: The dragon eats a lot of crickets, and it loves dandelions, bok choy, carrot tops, and nasturtium flowers. It remains uninterested in chard. On my next trip to the store, I'll get some kale to see how she likes it. Also, when the lizard gets sleepy, it's like a puppy. It's eyes get a little blinky; then, it crawls off of its basking rock into a hidey corner, lays its chin down, closes it eyes, and crashes out for the entire night.
I'll post pictures soon.
Posted by Good Enough Woman at 12:55 PM 6 comments: 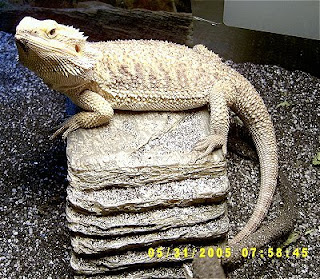 Okay, so that's not actually her/him. We won't have our specific bearded dragon until tomorrow. But still, you get the idea.

List I got from Ink, which came from Faemom: (BTW, I cut and pasted from Ink and had some formatting problems. There is supposed to be some bold here, and I can't get rid of the underlining.)

→ Now the rules of this tag:

1. Respond and rework: answer the questions on your blog, replace one question you dislike with a question of your own invention.