We are back from Hawaii, and I will have a few pictures and more details soon.

The best part about getting home from Hawaii? The kids are on Hawaii time, and so they slept until 9:00am for the first time in their lives--two days in a row.

The worst part of getting home from Hawaii? We're not in Hawaii anymore.

Oh, and also, now it's time to face all of the chores/crap that have been waiting for us at home. Today, I'm starting to get my finances in order a la Suze Orman style. Despite the fact that she drives me bonkers, she gave some good basic advice in a recent issue of Oprah (the de-cluttering issue). So I went to Staples and bought a shredder, a fire-proof safe, and a file box*, and now it's time to sort, shred, and organize.


*And I bought a couple of pretty notebooks because, I mean really, I just can't resist pretty school supplies.
Posted by Good Enough Woman at 3:04 PM 13 comments:

I, GEW, am currently in Hawaii, and, upon return to California early next week, will provide photos and highlights. For now, I will just say that we are having a wonderful time and have done lots of great swimming and kayaking. However, I'm afraid that the current score reads as follows:

If they go after the kids, I am going to kick some Portuguese Man-O-War ass.

Recently, a friend of mine started a blog called A Year of Thanks, in which she offers a daily post about things for which she is grateful. She wrote a post on children a week or so ago, and the day after the post, the kids and I took a walk to the bay on an incredibly beautiful Saturday. I couldn't help but think about how much gratitude I feel for my children and the circumstances of my life. I am so grateful that I have two wonderful, healthy kids and that I have a great husband and great extended family and that we get to live in such a beautiful place. I have no idea how I got such a good ticket in this world, but I am profoundly grateful.

Some pictures two Saturdays ago--a walk to the coffeshop and bay: 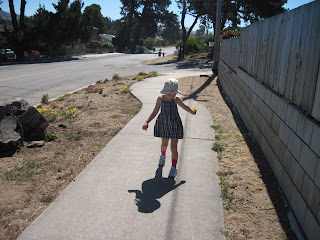 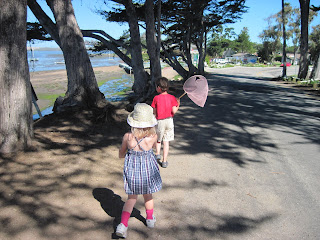 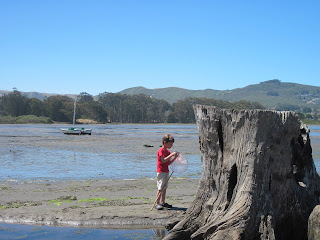 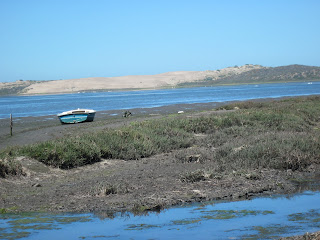 Some pictures of last Saturday--playing in the dunes after kayaking across the bay: 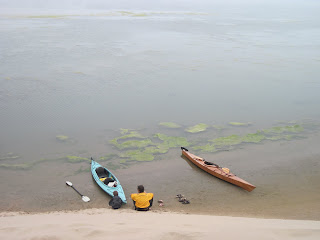 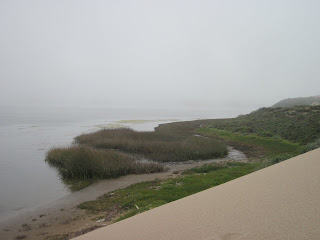 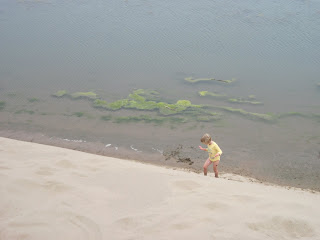 What To Do When Struggling to Write Text for the Dissertation: Ideas #1 and #2

I'm sure that many of you have strategies for what to do when it's difficult to face the current piece of academic writing. I thought I'd start making a list.

Here are two things that I'm doing today that seem to be helping me get into the groove and make progress despite my fear of the page:
I'm sure I'll figure out more of these (and I'm sure I'll remember more of them that I've used in the past), but feel free to share your own ideas about how to get your mojo flowing once your butt is in the chair*.

*I did not including "blogging," which is clearly what I just stopped working in order to do. But since this isn't a list about procrastination, I didn't include it. Now, back to my regularly schedule writing work.
Posted by Good Enough Woman at 4:20 PM 6 comments:

No, I Cannot Bump up Your Grade

I have been meaning to write one post about how much gratitude I have for my life and another post about how my kids to the scissors took their hair, but I haven't had time.

In the meantime, I will offer you the full text of a e-mail message that I received yesterday from a student:

Mrs. GEW, is there any way that i can persuade you to bump my grade up to a passing letter? I know that I was not the hardest working student in class or the smartest, but i did try very hard, and i just couldnt write very effective papers. Is there anything that i can do? I was sooo close to passing english!

It's nice when they make it so easy.
Posted by Good Enough Woman at 4:02 PM 6 comments:

Why Jacob is so Much better than Edward

I mean really. I just don't get it.

Let me start by admitting (again) that I have read the Twilight books. I have written about my first impressions here, and I think I also wrote more about how much the gender dynamics of the books drive me crazy, but I'm not sure when I did that.

Anyway, a couple of nights ago, hubs and I watched New Moon. And I just need to say it: Jacob is hot, and Edward is not. I love vampire stories. I do. But in Twilight? I'm with the wolves. Here are some main reasons I like Jacob, and think Bella is nuts for choosing Edward:

The only reason I was able to make it through the fourth book is that the first half is told from Jacob's point of view.

I think Bella should have ditched Edward and gone to live with Jacob at La Push.
Posted by Good Enough Woman at 10:36 AM 10 comments:

The dissertation has been ignored for several months.

So, I am now dusting off my notebook, settling in with Factual Fictions: The Origins of the Novel by Lennard J. Davis (a bit outdated, but still helpful), and I will go from there.

I hope to get a lot of reading done and write 15-20 pages in the next two weeks (despite having to arrange for the Girl's birthday activities and prepare for a family trip to Hawaii).

Yes, the newest member of our menagerie is an actual, warm-blooded mammal! And one of the cutest ever, in fact. Also, she seems to have figured out her familial duties, which are to give love and snuggles to the Girl. 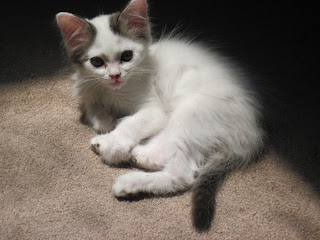 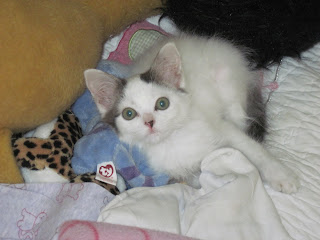 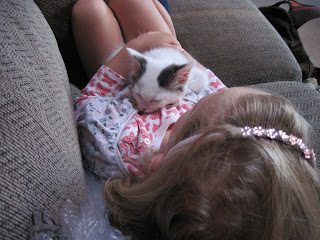 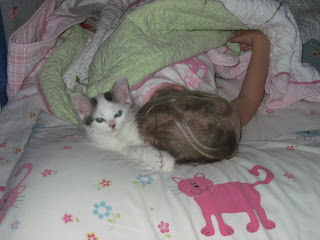 And then there is this picture taken by the Girl (who is getting a camera--in addition to this kitten--for her birthday): 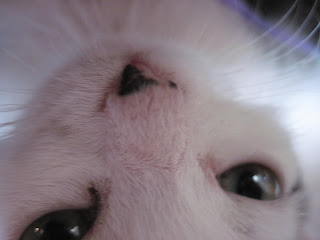 Gotta go now. I have a kitten in my lap, and it's time for Buffy, port, and chocolate.