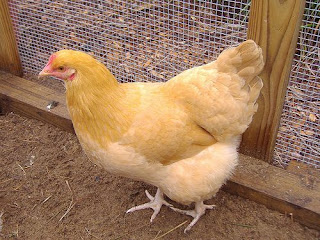 No, I haven't purchased chickens. But we did spend a couple of hours yesterday with friends who have chickens. The girl spent the whole time carrying the chickens around with their feet pointed at the sky (apparently, that's how they feel most comfortable being held, but still they didn't look all that thrilled to be carried around endlessly by two four-year olds).

I have mentioned to my family my potential interest in getting chickens--maybe for next spring. The kids are thrilled. The husband, less so.

But first, I need to make more progress on other parts of the sufficiency/sustainability scheme before I launch into the world of chickens.

Some of my plans:
Of course there are many other types of goals that are part of this whole simplicity/sufficiency/sustainability plan, but if I can do the above things, I will consider myself chicken-worthy.

But first, it's time to go on a cruise to Alaska! Ah, the simple life.

P.S. Yesterday, in the midst of preparing for the trip, I managed to get two hours to work on the dissertation, which I have been sorely neglecting. While I didn't read much, I did re-think my chapters, which felt like progress. Just letting you know that I haven't let all of my academic responsibilities go by the wayside as I fantasize about building my backyard homestead.

*Picture of Buff Orpington chicken is from BackyardChickens.com
Posted by Good Enough Woman at 1:30 PM 7 comments:

No, this is not a post about Paris Hilton.

In reference to the last message, I am probably not going to move to five acres and start homesteading. First, my husband wouldn't be game. Second, we would have to move quite far away from where we are now to afford something like that, and that's not going to happen. Plus, I love where I live.

Okay. So. I've been thinking about how to break this whole thing down. And the thing is, my desire to escape to a farm or homestead (when I know nothing about farming and homesteading) is really a desire for simplicity and sanity. I want to eliminate the unnecessary stuff and processes that seem to constantly go on around my family and me. I don't want to feel buried under or surrounded by stuff. I don't want to always be looking for stuff I can't find. I want to be more self-sufficient. I want to conserve. I want to create things from scratch.

Perhaps such a quest is quixotic. It certainly seems overwhelming. Nevertheless, I think I might get started, taking baby steps. I was even thinking of giving the blog a new title, and I might at some point if I keep up this quest. I've been suffering blognnui lately as is. But for now, I think I'll leave the title but will start trying to post entries about efforts to de-clutter and get back to basics. These will be my baby steps as a I try to focus on the simple, the sufficient, and the sustainable. I'm sure academics and kids will still pop up as part of the process.

Today, for example, I cleaned out (mostly) my half of the clothes closet. I purged the clothes I don't like and don't wear regardless of whether or not they fit (except for a few things I don't wear often but that my husband has given me). I purged things that don't fit, except for a few favorite pants that I optimistically stored in the top of the closet for "someday." I did the same for most of my drawers in the dresser--just a couple of more drawers to go. Now I have two big garbage bags to give to Goodwill.

Oh, and last week, I cleaned two-thirds of the "linen" closet. I still need to do some purging and folding of linens, but I organized all of the wrapping paper, cards, candles, and toilettries and, as a result, I found everything I needed to wrap my daughter's b-day presents. Usually, I'm running higgledy-piggledy to the drug store at the last minute to get wrapping paper. Thus, cleaning the closet saved me time and money.

In both cases, by purging I seemed to end up with more instead of less because, in both cases, I came across things that were buried under other crap. Shirts (Oh, I remember this shirt!). Shoes (I forgot about these!).

And now I no longer have to wear those corduroys that chafe my waist because they are gone.
Posted by Good Enough Woman at 10:11 PM 6 comments:

I am not really built for multi-tasking. Rather, I am built for long afternoons of single-minded activities (with reading being at the top of the list). But these last several days, and in the upcoming weeks, it's all about broken time and interruptions. Yes, many of them are good interruptions, but it makes my desire for single-mindedness burn stronger.

There's tomorrow Big Celebration--a birthday party for both kids, to which I have invited just about everyone. Are you coming? You can. There will be a bounce house for the grown ups and beer for the kids. Wait, strike that. Reverse it.

Then there's the smaller birthday dinner for Roo on Monday. Then I have to write up some student learning outcomes. Then my dad visits. Then there are dentist appointments. And then there is the fact that, somehow, my house is always a disaster, even right after I clean it. So I'm doing that everyday. Oh, yes, and then there are my beautiful children for whom I must care. Then there is packing for the cruise. Yes, a cruise. You aren't feeling sorry for me anymore, are you.

I had envisioned getting a lot of dissertation work done during the three weeks between submitting grades and going on the cruise. But, clearly, I was delusional.

Perhaps this is why I've recently been fantasizing about homesteading (and I'm currently reading Letters from a Woman Homesteader by Elinore Rupert/Pruitt Stewart). Somehow, it sounds like such a unified life. Or maybe not a homestead, but a nice simple life on a few acres. I could raise vegetables and chickens. Do a bit of canning. Maybe pull out the sewing machine and take on some projects inspired by my friend over here. The kids could run around outside. I could read while they play. Or maybe it's not quite that easy . . .

Or I guess I could just quit my job and PhD, and then my life would be more unified.
Posted by Good Enough Woman at 10:42 AM 9 comments: