This Saturday, it started to happen again. Any ideas I had about a schedule for the day began to get entirely hijacked. Around 11:00 a.m., I hadn't yet done much of anything except for try to figure out how we'd spend the day. Hubby had made a decision to do yard work, so that's what he did. I was navigating play date possibilities and competing schedules, none of which coincided with what I wanted to do for the day. As a result, I found myself frustrated and in tears (again! twice in one week!) on my bed.

And then it hit me: I can just decide.

So I got up, went back outside, sat on the bench and started putting on my shoes. "I'm going to the tide pools," I said. "I would love it someone wants to come with me. Oh, and anyone who stays home with Daddy won't be playing video games because it's a beautiful day. It's not a day for gaming."

Guess what? Both kids wanted to go. It took us a while to get out the door, but they were eager and never complained. We had a wonderful time, and I felt in control of myself as a person and of my parenting. Sometimes, in my effort to make my kids happy, I just offer too many choices. Perhaps those choices are not always good for them or for me. Sometimes, I just need to decide.

Below: a "gumboot chiten," sometimes known as the "wandering meatloaf" 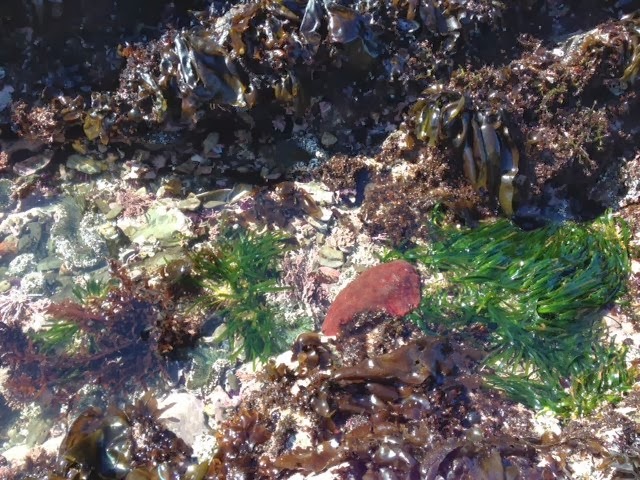 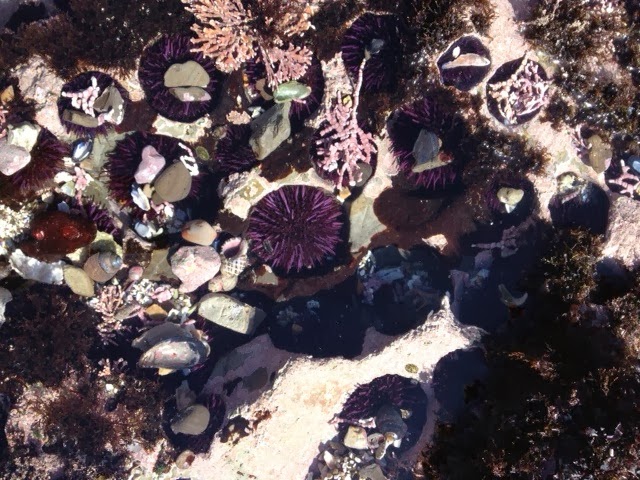 Below: a very large sea anemone all closed up (SO soft!) 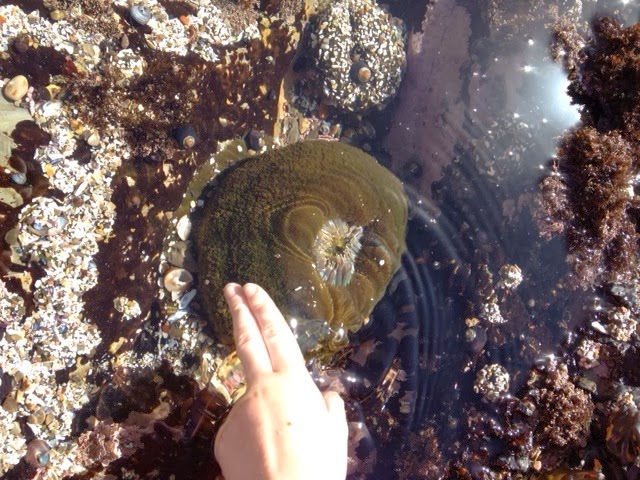 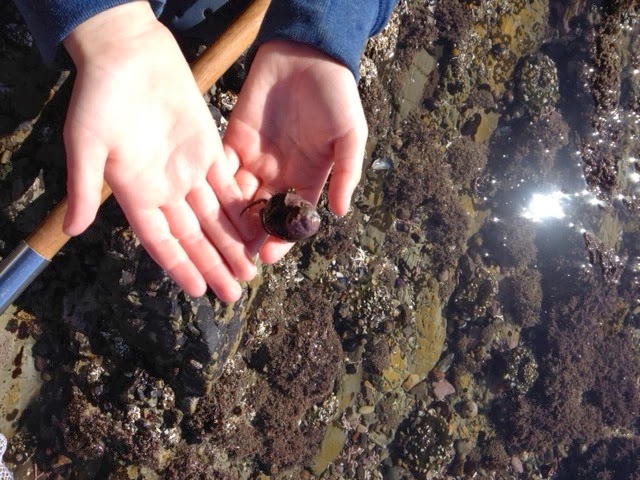 With kids, a job, and a PhD to finish, each day is a delicate balance, and I often find myself feeling pretty much the same way I do when I'm attempting tree pose while wearing my baggy pajama bottoms. It just doesn't work.

Lately, I've felt really out of balance. There have been many illnesses at Chez GEW. Strep throat (once for one kid*, twice for the other kid**), a serious case of viral tonsillitis, and various colds. Good or bad, I have not been sick yet***, but when the kids are sick, everything else stops. And these illnesses are never expected, of course, so they disrupt plans.

Granted, I am a parent, so I know my plans will be disrupted by my kids' needs. But lately, I have felt as if this is happening every day and, especially, every weekend. As a result, I find myself spinning in circles, sometimes literally (as I stand in the living room trying to figure out what to do next), not feeling productive (or good enough) at anything.

I had a bit of a breakdown on Monday. There were tears. I can't remember the last time this kind of distress caused tears. It felt weird. But the tears and the breakdown did help me realize that I'm just feeling very out of control and ineffective.

This probably won't last long, but I probably do need to try to figure out ways to either change or accept the circumstances--maybe a little bit of both--over the next couple of weeks in order to feel better. I'm still working on what that balance will be and how I'll go about it. Or maybe I just need to realize that balance is not the right metaphor. Maybe I'm on a teeter-totter that will always be heavier on one side than the other. Maybe I just need to make sure that, occasionally, I switch sides and that I avoid crashing hard one way or the other.

Note: This distress feels really silly and inconsequential when I think about a family in my community who just lost a teenage son to leukemia on Valentine's Day after he struggled with the illness for two years. I really can only barely imagine the stress and subsequent grief of such an experience.

*although the kid who has only had it once is worried that the second shoe will drop on him later this week (and since one usually gets it when the other does, his concerns are legit)
**at this point, we are wondering if someone is a carrier
***probably just jinxed myself
Posted by Good Enough Woman at 8:44 PM 2 comments:

Something is Better than Nothing, Except for When It's Better to have Nothing

I have been paying attention to the Rule of Three, but I have been only partly successful. So far, I have walked at least three times per week (that is, if I take two walks in the next two days), and until this week, I've done about two hours per week on the PhD. But I've only done yoga about once a week. As for home-related projects? It's been a bit of a blur.

This week I had interruptions to my regular walking and PhD schedule, so now I need to do some make-up work over the next couple days. Doing things around the house is such a constant battle effort that it's hard to separate the productive projects from everyday management. I've made a couple of project lists, and I haven't done very well with them. But something is better than nothing, right?

Well, sometimes. Except when nothing is better--like an empty junk drawer or shelf with nothing on it.  To that end, I have decided to try to find at least one thing per day that I can give away or throw away. On Wednesday, I took 15 minutes to pull old clothes out of three drawers, and I ended up with one bag of clothes for Goodwill. Yesterday, I found some toys and books that I could donate to my daughter's class "store." I am hoping that these daily efforts will seem less overwhelming than a giant overhaul while still helping me make progress toward decluttering our home so that we can all be good stewards of what we have rather than collecting a bunch of stuff we can't manage.

Below is the bag of stuff I got rid of. It's not much, but it only took 15 minutes. I'm keeping the dog. 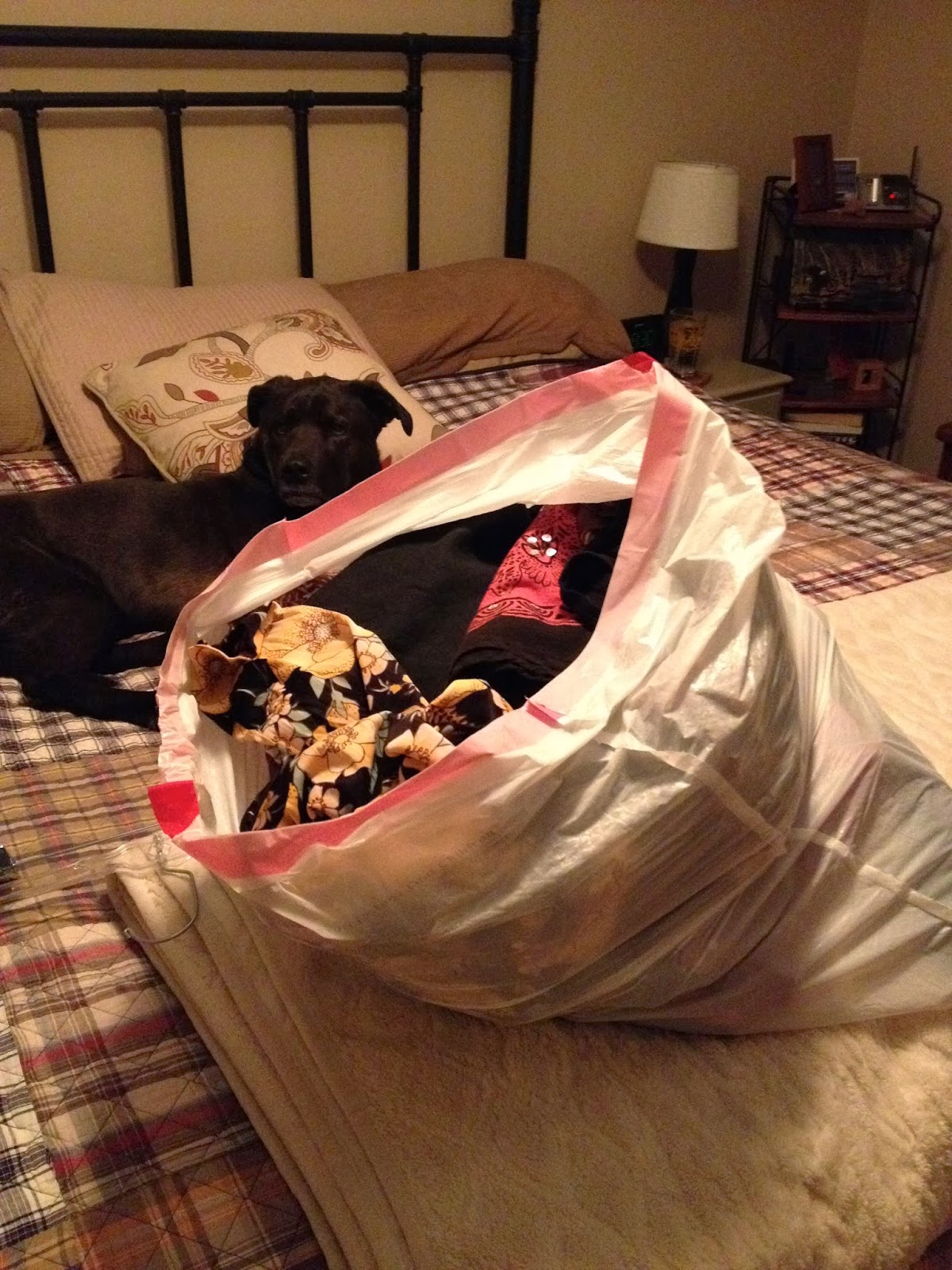