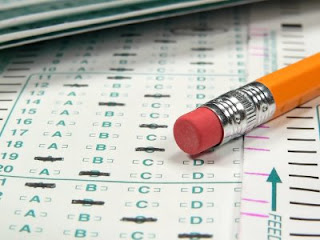 I know that very few of you want to talk about Student Learning Outcomes and Assessment (SLOA). I know that everyone has been doing the duck-and-cover routine for 10 years, hoping all of this nonsense will just go away. Even as people like me have been saying, "Let's just do this so we can do it our way," most of you have been nervous. "They'll hold it against us," you fear. "They just want quantitative data," you say.

Well, look. I'm not in love with this stuff either. But I just spent all of last year editing our 300 page accreditation self-study, which was hard and extremely time consuming and which I thought might cause my husband to divorce me. And now, despite those efforts, our accrediting organization has put us on warning. Yes, I agree. They are whack. But still, we are on warning, mostly because we don't have our SLOA ducks in a row.

So. This whole duck-and-cover thing has cost me time, time I could have used for much better things--more time, I think, that if we just got the job done right the first time. So I've been saying this to some of you lately, and you still don't want to hear it. So, for now, I retreat. I will do some research, keep some notes, and build my little file of ideas in case you come to me and say, "Um, Hey, GoodEnough. What were those things you said about assessment?" And I'll whip out a plan that we can put into action.

But until then, I retreat. I retreat because I don't want to pull your teeth anymore and, plus, I OD'd on committees last year and am over it. And also because, really, I don't care that much. I feel confident that we won't lose our accreditation because, ultimately, the administrators at our college have way more riding on this than I do. Plus, if someone, in their last minute rush to meet the standards, says, "You need to start giving this multiple choice scantron test to all of your students," I'd say, "Okay. Whatever." Because I've realized that I just don't care that much about whether everything goes down perfectly. I still won't teach to the test. I'll still teach the good stuff. My students will learn. And you won't fire me. And, at some point, we could probably fix the problem because bad plans can be reversed. And I will try not to say, "Told you so."

*I don't mean to suggest that "people" and "bloggers" are two, exclusive categories. I do believe that bloggers are people.
Posted by Good Enough Woman at 8:56 PM

OK. We were starting to do SLOAs 10 years ago when I was teaching at your CC. Is it really that hard to test if someone knows how to use commas? or write a paragraph? or do a math problem?