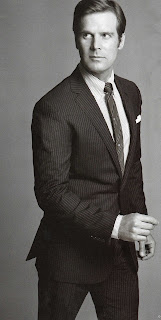 I have a crush on Peter Krause. It's because of his role as Adam Braverman on Parenthood. He's handsome, and he cracks me up.

Oh, and did I mention that I once saw Peter Krause in a pie shop near Sebastopol? So, you know, it's like we're friends.

edit:// I just remembered another crush from the mid 90s: Tobias Wolff.
Posted by Good Enough Woman at 9:51 PM

Have you seen him on Sports Night? It's good enough just for Aaron Sorkin's writing, but Krause makes it even better.

And the later years: Johnny Depp?

I had some of the same crushes as you! Actually, I still have a crush on Bon Jovi!

Ooh, ditto. And Michael J. Fox, for the "lost years" there?

Amstr, Sports Night is TOTALLY on my list, and I just found out a few days ago that Krause was in it. Now it's at the top of my list.

TKW, OMG, I totally forgot about Rick Springfield! You nailed it! I KNEW there had to be someone from middle school, and he was it. I watched him him on General Hospital and I knew all the words to all his songs. Good call!

LKL, Yes, I thought about MJK because I did have a crush on him, but I don't think he gave me the same "feelings" as some of the others. ;)

JC, I totally thought about adding Kirk Cameron. But I saw him in Left Behind (believe it or not), and I just couldn't do it. BUT you reminded me about Ralph Macchio. How could I have forgotten the Karate Kid? And I once saw him in an off-off-Broadway play in NY, so he's kind of my friend, too. And, oh, yes. Patrick Swayze. "Nobody puts Baby in a corner!"

Rick Springfield and his soap-opera-to-pop-stage life is such a good call.

Fie upon this quiet life! said...

ooo. I loved Rick Springfield too. And Michael Jackson. Ha. Now? I grudgingly admit to having a wee crush on Rob Pattinson, even though he's 10 years younger than me. Geez...

So did Krause on the surfboard clinch the crush status for him? (I just watched episode 7 on Hulu.)